MAIN STREET PRACTITIONER is the only magazine that addresses the information needs of tax and accounting professionals. Cutting edge information, trends and best practices are just a few of the content-rich articles that are included in each issue.

Published by the National Society of Accountants (NSA), MAIN STREET PRACTITIONER is presented in a digital format that is easily accessible on any smart device, including smart phones, tablets, and computers. The digital issue also includes the ability to share articles through email and social media.

Each issue focuses on a timely theme and includes special features, case studies, tips from our tax desk, and best practice information from a variety of experts in the field. Readers also have access to the latest NSA news and member-exclusive offers as well.

The National Society of Public Accountants (NSPA) was incorporated as a nonprofit corporation in 1945 in response to the need for a national organization to work for the welfare of public accountants, collectively and individually. The founding fathers wanted NSPA to secure public and legal recognition for the rights of accountants in public practice, promote professionalism, and obtain for its members the right to represent clients before the Treasury Department. Its first headquarters was in Oklahoma City, followed by a move to St. Louis in 1947 and then, in 1955, to Washington, DC.

NSPA’s first major nationwide initiative was working with the Treasury Department on the 1951 revision of Circular 230 to allow qualified individuals, other than attorneys or CPAs, to practice as Enrolled Agents before the IRS. It took almost another decade of work assisting the Treasury Department before a Special Enrollment Exam was developed to replace the exam previously prepared by the AICPA. NSPA solicited sample questions for the exam from its members – paying as much as $30 per question. NSPA also published a training course to help its members prepare for the exam. When Circular #230 was revised once more in 1959, NSPA members were prepared. Of the 1,264 individuals who passed the first Special Enrollment Exam, 46% were NSPA members. Today, NSA continues to support the Enrolled Agent program by offering an Enrolled Agent Preparatory Course.

Between 1965 and 1974, NSPA focused on regulatory issues. Battles were fought as accountants sought to retain their right to call themselves “accountants.” As federal taxation matters became more cumbersome, the Federal Taxation Committee was created in 1970; previously this area had been handled by the Committee on Government Affairs. The Society grew in numbers and strength and established its own Scholarship Foundation (in 1969) to assist deserving students in fulfilling their dreams.

Continuing professional education was a major focus during the 1970s. In 1973, NSPA established ACAT (Accreditation Council for Accountancy and Taxation) as an independent credentialing body to provide a standard of competency in the area of public accounting. In 1976, NSPA launched the National Accounting Forum, a two-day program featuring 16 hours of CPE. Later, to help our members provide high quality professional services, we introduced the National Estate Tax conferences and the ACAT Review Course.

NSPA’s fourth decade was one of growth and expansion; membership increased steadily, services expanded, and NSPA’s legislative efforts proved significant. In 1976, NSPA and the Small Business Administration signed a Technical Assistance Agreement. This agreement, still in effect today, has helped small businesses enhance their credibility and financial strength. The Small Business Paperwork Reduction and Penalty Equalization Amendments Act, introduced in the U.S. House of Representatives in 1979, marked the first time that a bill NSPA drafted and sponsored was introduced in Congress. The 1980 convention in Vancouver, B.C., Canada, drew a record attendance—more than 950 members and guests; the featured speaker was Assistant Commissioner Gerald G. Portney of the IRS. The same year, NSPA moved into a new two-story headquarters building in Alexandria, VA—just minutes from the nation’s capital.

In 50 years, the Society had gained the recognition and respect of Congress, the Internal Revenue Service and other federal agencies, professional organizations and associations. To reflect the Association’s diverse membership, in 1995 the House of Delegates voted to change NSPA’s name to that of the National Society of Accountants (NSA).

To protect the general public, NSA has always required its members to adhere to a Code of Ethics. In January 2003, the NSA Board passed a Resolution on Accountability requiring NSA to thoroughly re-evaluate its Code of Ethics and Rules of Professional Conduct and to recommend that its affiliated state organizations also examine these areas.

Today, NSA continues its work to preserve the practice rights of the independent practitioner. NSA is involved in ongoing dialogue with the AICPA and NASBA—the organizations that drafted the newly revised Uniform Accountancy Act (UAA). The Society provides quality continuing professional education (CPE) opportunities programmed into a variety of seminars, convention education offerings, and review courses for the Enrolled Agent and ACAT exams. NSA works to assist the IRS in many areas. It has representatives on the Internal Revenue Service Advisory Council (IRSAC), the Information Reporting Program Advisory Committee (IRPAC), and the Special Enrollment Exam (SEE). As a stakeholder with the IRS, NSA provides input to regulations and proposed changes and is present at all meetings of the IRS Office of Public Liaison. 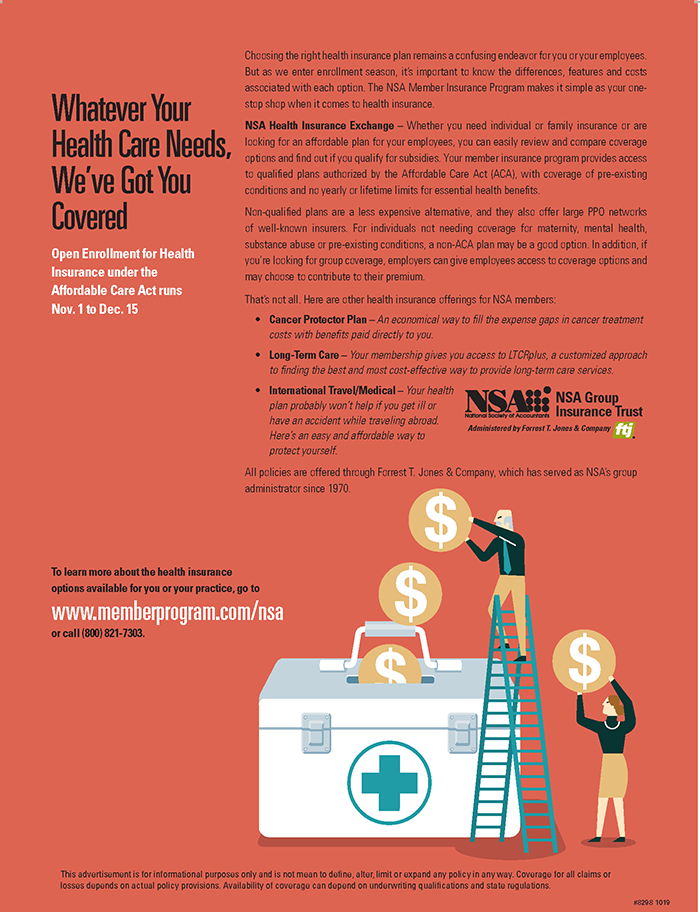