When Brian L. Thompson, CPA, a partner with Bailey & Thompson Tax & Accounting, P.A., in Arkansas, was forced by the Internal Revenue Service (IRS) to conduct a tax return audit for a client with an IRS representative on April 15, 2015, he was surprised and disappointed that this awkward timing could not be adjusted to a date other than the IRS tax filing deadline.

So imagine his shock when a similar situation happened again this year. Tax returns for two individual clients and their three related business were audited, this time in January. The IRS auditor finished the field work in February, and audit reports were due by mid-March. But March turned into April, and on April 3 Thompson received audit reports with comments due by April 8. Some adjustments needed to be made to the reports, and the auditor finally provided an updated report on April 7 with an April 18 due date for comments.

“This is exactly the type of problem we often face with the IRS, and it could be avoided so easily if the IRS simply recognized that early April is the busiest time of the year for tax preparers,” says Thompson, who is also Second Vice President of the National Society of Accountants (NSA). “And ironically, it’s because of the tax deadline that they set! So it seems that common sense would dictate that any other time of the year would be better to close out an audit.”

To deal with this and other challenges tax preparers face with the IRS, NSA last year issued a “Tax Practitioners Bill of Rights.”

NSA hopes the Bill of Rights will establish timely enactment of tax laws and regulations and reasonable levels of IRS service for tax practitioners, who file 60 percent of the tax returns received by the IRS each year.

The NSA Tax Practitioners Bill of Rights includes the following:
1. THE RIGHT TO HAVE TAX LAWS AND RULES PASSED IN A TIMELY MANNER, INCLUDING:

2. THE RIGHT TO QUALITY SERVICE FROM THE IRS, INCLUDING:

3. THE RIGHT TO PRACTICE WITHOUT UNDUE IRS DEMANDS DURING TAX FILING SEASON, INCLUDING:

NSA issued the Tax Practitioners Bill of Rights at a time when the U.S. House of Representatives Appropriations Committee Financial Services and General Government Subcommittee voted to cut the IRS budget by $838 million (7.7 percent), continuing a multi-year decline in IRS funding. The funding situation has not improved since then.

NSA Executive Vice President John Ams says, “It’s ironic that the IRS has time to conduct tax audits during the height of tax season, yet tax practitioners cannot get timely responses from the IRS for questions we pose on behalf of our clients because the IRS cannot afford the staff it needs to answer the phones.”

The IRS already has a Taxpayer Bill of Rights, but Ams notes that this does not address the many challenges that tax practitioners face when preparing returns for the 60 percent of U.S. taxpayers who hire them to prepare their tax returns. 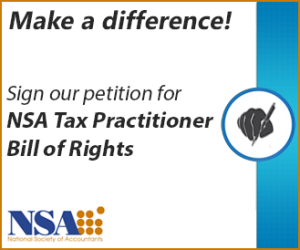