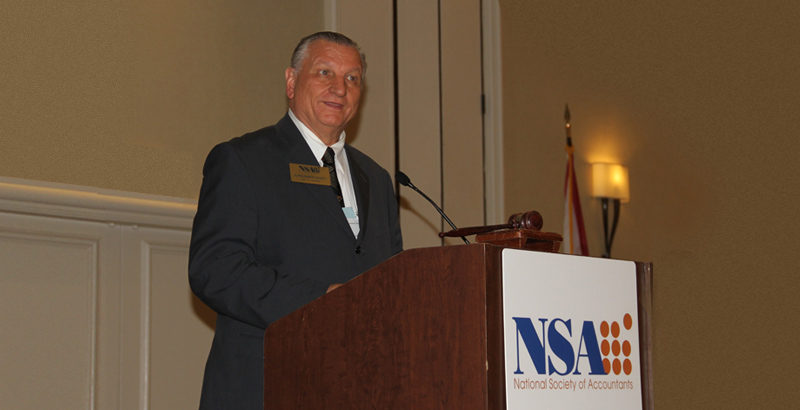 Newly-installed NSA President, Al Giovetti shares his membership goals for the coming year and what he hopes his diverse background will bring to the role of president.

If you’ve met National Society of Accountants President Al Giovetti, of Catonsville, Maryland, then you’ve probably met NSA member Christine Giovetti, his wife and business partner. Main Street Practitioner reached out to Christine, who is both a member and recipient of NSA’s 2014 Accountant of the Year Award, to bring her unique perspective to our annual interview with the NSA’s president.

In another time, Al Giovetti might have been called a “renaissance man” – his education and interests range from accounting to medicine to the computer entertainment industry and beyond.

CG Anyone who knows you will understand this question – “Al Giovetti – you’ve just been elected president of the National Society of Accountants! What are you going to do next?”

AG (laugh) Actually, my family and I went to Disney World the week before I was elected. I won’t be going again for at least a couple of months. <grin>

CG Where did you get this love of all things Disney?

AG As a child, I loved the animated films, the Wonderful World of Disney on television. I even dreamed of meeting Walt Disney; unfortunately, I never did. As I grew, and learned more about Walt Disney the man, the visionary, I strived to use some of his innovative ideas on management and business in my life and practice. (And yes, I own some Disney stock – a piece of the Mouse, as it were.) Visits to the theme parks serve to reinforce this; I learn something new every time I go. Besides, it really is the happiest place on Earth!

CG Tell us a little about your practice. Do you have employees? What sorts of clients do you serve?

AG My wife and I have run our practice for over 35 years. Our four children – who are NOT accountants, and want nothing to do with that profession! – grew up with us working in our home, first in our living and dining rooms (in our first house) and then in our basement (in the home we have lived in since 1984). Other than a couple of seasonal employees in past years, it’s always been just the two of us. Our clients are mostly individuals, a few small sole props, as well as a couple of partnerships and corps. We also have a couple of farm clients. Because of where we live, most of our individual clients work for the federal government in some capacity; also the state government.

CG Where did you receive your education?

AG I graduated from LaSalle College in Philadelphia with a BA in Biology (minors in Chemistry, Physics, Religion, and Philosophy), then attended George Mason University in Virginia and George Washington University in DC, eventually earning a PhM in Microbiology and Physiology. Put simply, a PhM is a PhD without the doctoral dissertation (which I did, but that’s too long a story to go into). After working for the federal government, as a Food and Drug officer and a research chemist, for ten years, I was RIFed – Reduction in Force. I started preparing tax returns on the side back in college, and had started doing them again by the time I left the government, so I just went into it full time. After my wife and I both passed the EA exam, we decided to go back to school to study accounting. Together, we completed all the coursework we needed at the local community college, and we both passed the CPA exam by 1991.

CG What prompted you to run for president, and what are your goals?

AG I served as governor of District III for two terms; for the last term, the other governors honored me by electing me Senior Governor both years. The friendships I made during this experience, and the confidence they place in me, encouraged me to run for the office.

As president, I believe I can help NSA grow and thrive. I would like to get the members more involved in the voting process. In the past, NSA delegates had time at the convention to meet the candidates face-to-face and make informed decisions. Even though now, with proxy voting, every member can vote, less than 4% of our members participate by voting, and less than 1% attend the convention. This response is disheartening, to say the least. I believe that, through better communication, we can encourage more members to participate.

CG Do you see any issues facing accountants and tax preparers as a result of the upcoming national elections?

AG The candidates, in my opinion, don’t seem to have a good understanding of the inequities of in the income tax law. Complexity is needed in the law to take into account the special needs of certain groups of people. For example, the limitation on the deductibility of medical expenditures basically discriminates against the elderly and the disabled – by not being able to deduct all of their medical expenses, they are paying more tax than a person without those challenges.

CG You are also active in your Affiliated State Organization (ASO).

AG I have served on the board of directors for the Maryland Society of Accounting and Tax Professionals (as president) and the Virginia Society of Tax and Accounting Professionals (as a delegate); I’ve also served on several committees at both the state and national level. This has all served to help me understand that each state, each ASO, has different needs, and we must do our best to represent all of them.

CG You mentioned an earlier career as a research scientist. Have you worked in any other fields?

AG Back in the late 1970s, when microcomputers were first introduced, I became involved in the computer gaming industry by writing reviews and walk-throughs of many role-playing games, and was nominated for a Computer Press Award in the 1990s. I was even on television for a while; much of my work can still be seen on YouTube. I continue to write reviews on business hardware and software for several publications. My wife and I have also taught several accounting, business law, and computer courses for accounting majors at the local community colleges, as well as continuing education courses for small business owners.

CG Tell us a bit about your background and your family.

AG I was born in Alexandria, VA, and grew up with my two sisters (one older and one younger) in a neighborhood that lies between Old Town and Mount Vernon. After I graduated from St. John’s College High School, a military school in Washington, DC, I attended LaSalle College, also a Christian Brothers school, in Philadelphia. My wife, who is a Maryland native, and I met in Ocean City, MD, in the mid-1970s, and settled in Maryland after we married in 1977. We have three daughters and a son – our oldest, Allison, and her husband James are both IT professionals – she does web support for the professors at the Johns Hopkins School of Engineering and he is the IT manager for The Shelter Group, a housing management company. They live in Ellicott City, MD; our son lives with them (he is currently between jobs, and is also in the IT industry). Our daughter Catherine is a manager with Aldo Shoes in Vancouver, WA, and our daughter Amanda, a summa cum laude graduate of Arizona State University’s Walter Cronkite School of Journalism, is now a cabinet maker with a company in Richmond, VA, that makes furniture for hotels and other commercial uses. She spent ten years as a layout and copy editor, first with a division of the Chicago Sun-Times and then with the China Daily in Beijing, and then decided she wanted to try something different! We are still waiting for grandchildren.

CG How about hobbies?

AG I’ve been walking about 5-7 miles a day for the past two years, and it’s really been great. I have downloaded lots of audiobooks to my iPhone, and have enjoyed listening to them – science fiction, science fantasy, self-help books, philosophy, business – I have very eclectic tastes. I’ve also read all of the books from the Leadership Development Program list – one of my recent favorites is “Lead … for God’s Sake!” It uses a fictional story to illustrate good leadership concepts.

My wife and I also enjoy movies, particularly old ones we can find on Turner Classic Movies and Netflix.

AG I want to thank the members for placing their trust in me for the coming year. With communication, cooperation, and collaboration, we will put members first and NSA will grow! 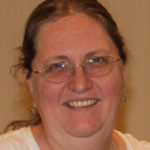 Christine Giovetti, ABA, ARA, ATA, CPA, is a professional accountant with more than twenty years of experience. She served as NSA Governor of District III. She has won multiple awards in her career and has served the NSA in many ways, including as the governor of District III from September 2003 – August 2007.